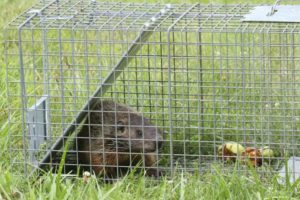 Woodchucks or groundhogs, same name for same species, are prominent throughout Michigan and are very capable of causing extensive damage through their feeding and burrowing habits. Their underground tunnel systems can reach as deep as five feet and extend up to nearly 70 feet in length.

Woodchucks are serious agricultural pests. Not only do they travel considerable distances to raid gardens, but their immense burrows damage farm machinery and destroy building foundations.

Behavior
Woodchucks are the most solitary marmots although several individuals may share a single den. Woodchucks are usually highly agonistic. Though observed mostly on the ground, woodchucks have been seen climbing trees to reach food and swimming with only their head and nose above water. Woodchucks are considered diurnal in their aboveground activities, although they have been observed feeding in dim light or even at night, especially when food is scarce.

When not feeding, woodchucks sun, scratch, and preen themselves outside their den while watching for potential enemies. Woodchucks are very vocal mammals, hence the name “whistle-pig.” When alarmed, a woodchuck gives a loud, shrill whistle. Teeth grinding and chattering are common when woodchucks are cornered. Woodchucks have also been heard to bark, squeal, and whistle when fighting with other woodchucks.

Dens are situated in well-drained locations. With strong, clawed, forelimbs and large teeth, woodchucks can easily construct burrows with as many as five entrances. A plunge hole is often near the major den entrance and may have a vertical drop of as much as 2 ft to a main tunnel. Horses have been known to break their legs when stumbling into these burrows. These dens are also very long, up to 45 ft of tunnels, extending as far underground as 5 ft. Dens in open areas are used in the summer, and those under stumps, at the edge of rock ledges, and near other protection are generally occupied during the winter hibernation. Dens are always kept clean and well padded. Occupied dens can be recognized by a pile of fresh earth at the entrance. Nesting chambers are about fifteen inches in diameter and are usually sparsely lined with dry leaves.

Number of offspring
2 to 7