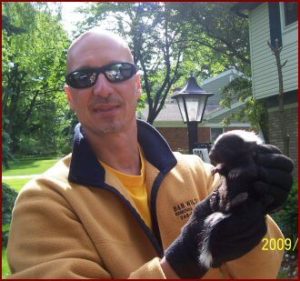 Skunks are common throughout Michigan, but their numbers seem to have increased in some areas in recent years, perhaps because human activities (and rural development) provide them with favorable conditions (food sources and shelter) and discourage potential predators. However, up to 90% of skunks die in their first winter.

Skunks can cause lawn and crop damage as they seek food. They may burrow under decks and outbuildings. Skunks can bite, spray humans and pets, and they are one of the primary carriers of sylvatic rabies, therefore they can be very dangerous to pets and humans.

Habitat
Mephitis mephitis prefers somewhat open areas with a mixture of habitats such as woods, grasslands, and agricultural clearings. They are usually never found further than two miles from a water source. They are also often found in suburban areas because of the abundance of buildings that provide them with cover.

Physical Description
Striped skunks are easily recognized by their characteristic colors and pattern. The fur is black with a white stripe that begins as a triangular shape on the top of the head, forks into two stripes that travel down the sides of the back, and usually merges again near the base of the tail. Another white stripe runs from the base of the snout between the eyes and ends on the forehead. The Striped Skunk is about the size of a domestic cat, with a small head, small ears, short legs, and a long, fluffy tail.

Behavior
Striped skunks are nocturnal, sleeping during the day in underground burrows and emerging around dusk to search for food. They prefer to use burrows made by other animals of equal size or natural burrows under tree stumps or buildings. They use their long front claws to build their own den if necessary.

Striped skunks use scent marking to communicate presence and reproductive state to other skunks. They also communicate visually, by raising their fur and changing posture. Skunks have a good sense of hearing, but their vision is poor. They are mostly silent, but do make a variety of sounds such as churring, hisses, and screams.

The spray from a skunk will not cause permanent blindness. Natural tears will quickly remove the chemicals from the eyes. It is very difficult to remove the scent from clothing. There are four subspecies of striped skunks, most of which are separated by a massive barrier such as the Mackinac Straits. They differ mainly in fur coloration patterns.

Striped skunks usually do not discharge the foul smelling contents of their scent glands unless mortally threatened. When faced with danger they arch the back and erect the tail and hair. When mortally threatened they bend into a U-shape with both head and rump facing the enemy. They then emit two streams of fluid from scent glands located just inside the anus, which meet after travelling about a foot, finally spreading into a fine spray that can travel up to 2 or 3 meters. The spray often causes nausea and burns the eyes and nasal cavities of the unfortunate target. Because of their offensive odor, skunks are rarely preyed on by mammalian predators.

Number of offspring
1 to 10