Michigan has 17 species of snakes

Like nearly all reptiles, snakes adjust their body temperature by moving in and out of warm or cool places. In Michigan, most snakes probably prefer a body temperature of about 75 to 85 degrees F. Extended exposure to freezing conditions would be fatal, and they pass the winter in a dormant state in underground rodent burrows or other natural frost free shelters. Accessible basements and houses with cracked foundations may also attract shelter seeking snakes, often to the dismay of homeowners!

Although the majority of reptiles reproduce by laying shelled eggs, many snakes give birth to babies that develop inside the mother’s body. Of Michigan’s 17 snake species, 10 are live-bearing and 7 lay eggs. Egg-laying usually occurs in early summer, with the eggs deposited in an empty rodent burrow, in moist sand or soil, or under a log or stump.

The vast majority are harmless, and the venomous species can be identified with minimal training and avoided with simple precautions when visiting natural areas. A bite from a non venomous snake can normally be treated as one would a scratch or puncture wound, with ample precaution against infection. (Simply leaving snakes alone and using care when walking in natural areas will prevent nearly all bites – these creatures do not seek confrontation with humans and accidental bites are rare.)

The State of Michigan has enacted legislation to provide for the protection and regulation of native reptiles and Michigan recently amphibians. Rare and declining species are now protected from persecution and exploitation, and all species are affected by limits on numbers that can be taken or removed from the wild. Shooting of snakes and other reptiles is prohibited. Anyone wishing to take or study reptiles or amphibians (frogs, toads, salamanders) in Michigan should contact the Department of Natural Resources Fisheries Division for details and licensing requirements.

A large shiny black snake with a white chin and throat. Young rat snakes are patterned with dark blotches on a gray background, and traces of this juvenile coloration are often visible in adult specimens. This is Michigan’s largest snake. Adult length: 3.5 to 8 feet. If cornered or grabbed these snakes may hiss and strike, but are non venomous and harmless to humans.

Black Rat Snakes occur in the southern half of the Lower Peninsula, but are rare and declining. They are listed as a “species of special concern” by the Michigan Department of Natural Resources, and are protected by state law. 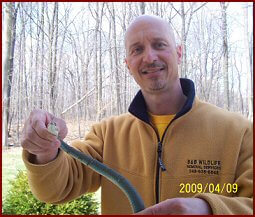 A large gray or blue snake with smooth scales. The head is usually darker than the body, though the chin and throat are white. The belly is light blue or white. Young racers are grayish, with a pattern of darker blotches and spots. Adult length: 4 to 6 feet. They will bite if cornered or grabbed, racers are not venomous.

Racers have been found through most of the Lower Peninsula (except the northernmost sections) and the southern tip of the Upper Peninsula. Once common, their numbers have fallen in many places.

A small brown or gray snake with a light stripe down the back bordered by black dots. These dots may join to form crossbars. The belly is white, cream, or pinkish in color. Adult length: 9 to 15 inches. These shy little animals are rarely seen in the open, and spend much time under objects or underground.

Found throughout the Lower Peninsula and the southern tip of the Upper Peninsula, brown snakes can be common even in farming and residential areas.

A small black, brown, or olive snake with three distinct yellow stripes down the back and a yellowish belly. Some specimens have dark spots between the stripes. The dark head is very small. Adult length: 15 to 27 inches.

Butler’s Garter Snakes prefer moist meadows, marshes, and lake edges. They can be common in urban vacant lots where there are objects to hide under and lots of earthworms, a favorite food. When frightened, these snakes may wriggle rapidly back and forth with little forward motion. This species is locally common in the eastern and southern Lower Peninsula.

A medium sized striped snake with variable coloration. Most are gray, brown, or greenish with three yellowish stripes down the back, and there may be black spots between the stripes, making the snake look “checkered”. The belly is pale white, green, or yellow. The tongue is red with a black tip. Adult length: 2 to 4 feet.

One of the larger snakes in Michigan, the copper-bellied water snake can grow to a length of 4-5 feet. Adult snakes are easily identified by their dark brown or black back which contrasts easily with the unmarked reddish-to-orange belly and chin. The young have a blotched pattern which may remain visible in some adult specimens.

This snake is extremely rare in Michigan. Its population is so low that it is listed as an “endangered” species in Michigan and is protected by law in the state. It has also recently been listed by the U. S. Fish and Wildlife Service as a nationally “threatened” species. It has been found only in the southern third of the Lower Peninsula. Any sightings should be reported to the DNR Wildlife Division in Lansing.

A thick-bodied, slow-moving snake with a flattened, upturned “nose.” Color is variable some have dark spots and blotches on a yellow, orange, or brown background, but other specimens are solid black, brown, or olive with little or no visible pattern. Easily identified by defensive behavior. Adult length: 20 to 40 inches.

Though recorded from most of the Lower Peninsula and the southern tip of the Upper Peninsula, Hog-nosed Snakes are most common in the western and northern LP. Their numbers have declined in many places, in part due to persecution by humans who mistakenly believe they are dangerous. 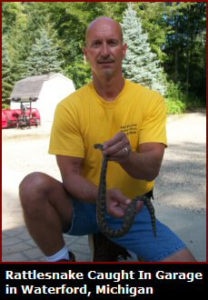 Michigan’s only venomous snake is a rare sight for most state residents. The massasauga can be characterized as a shy, sluggish snake. Its thick body is colored with a pattern of dark brown slightly rectangular patches set against a light gray-to-brown background. It is the only Michigan snake with segmented rattles on the end of its tail and elliptical, (“cat like”) vertical pupils in the eyes. Adult length is 2 to 3 feet.

Massasaugas are found throughout the Lower Peninsula, but not in the Upper Peninsula (thus there are no poisonous snakes on the Upper Peninsula mainland). They are listed as a “species of special concern” by the Michigan Department of Natural Resources, and are protected by state law. Their short fangs can easily puncture skin and they do possess a potent venom. Any bite from a massasauga should receive prompt professional medical attention.

This is a slender, smooth scaled snake with reddish or brown blotches on a gray or tan background color. There is usually a light “Y” or “V” shaped marking just behind the head. The belly is white with a black checkerboard pattern. Adult length: 2 to 4 feet.

Milk snakes occur in woods, fields, marshes, farmlands, and suburbs. They normally stay out of sight, often hiding under boards and trash near buildings. Milk snakes are fairly common throughout the Lower Peninsula, but are rare in the Upper Peninsula.

A large yellowish or light brown snake with dark brown or black blotches down the back and sides. The head may be reddish or orange, and the belly is yellowish, checkered with black. Two species of the fox snake occur in Michigan but their ranges do not overlap. The Western Fox Snake (Elaphe vulpina) inhabits woods, old fields, and dune areas. The eastern form (Elaphe gloydi) prefers marshes and adjacent wet meadows. Adult length: 3 to 5 feet.

The western fox snake is found in the Upper Peninsula, where it is often called a “pine snake.” The eastern fox snake, of the Great Lakes marshes in the southeastern Lower Peninsula, is listed as a THREATENED species by the Michigan DNR and is protected by state law.

A small reddish brown snake with four rows of black (often indistinct) blotches down its back, and a black head. The belly is pink or red with a row of black dots along each side. Adult length: 12 to 18 inches.

Found in damp meadows, vacant lots, and open swampy woodlands. The few recent records for this species have been in the southern Lower Peninsula. Kirtland’s Snake is listed as ENDANGERED by the Michigan Department of Natural Resources, and is protected in the state. Any sightings should be reported to the DNR Wildlife Division in Lansing.

A very slender black or brown snake with three bright yellow or white stripes down the back. The head is black, though the scales above and below the mouth are white. The belly is white or light yellow. Adult length: 18 to 38 inches.

Ribbon Snakes inhabit marshes and the edges of lakes, ponds, and streams. The snake can be found throughout the Lower Peninsula, and is locally common where suitable wetland habitat exists.

A water snake with dark bands or blotches on a light brown or gray background color. Some old adults may appear solid black or brown. The belly is white with reddish half moon shaped markings; some specimens have an orange belly speckled with brown or black. Adult length: 2 to 4 feet.

These snakes inhabit the shorelines of lakes, ponds, or streams. Northern water snakes are found throughout the Lower Peninsula and the eastern Upper Peninsula. Needless persecution by humans has eliminated water snakes from many places where they were once common.

This is a slender gray or brown snake with a whitish or yellow stripe on each side of the body. Three narrow black stripes may be visible on the back. The light colored belly has four dark lengthwise stripes. Adult length: 15 to 36 inches.

Queen Snakes occur in or near shallow streams, canals, or ponds, and often bask in shrubs hanging over the water. Queen Snakes are found in the southern two thirds of the Lower Peninsula, and are generally uncommon and local in Michigan.

A very small brown or gray snake with faint stripes down its back. The belly is red, pink, or orange (without the double row of dots seen in the rare Kirtland’s Snake.) Adult length: 8 to 16 inches.

Red-bellied Snakes inhabit both fields and woods, but are most often found under boards and other objects at the edges of lumber piles or trash dumps. These snakes are locally common throughout Michigan.

A small black or gray, shiny scaled snake with a yellow ring around its neck. Michigan ring-neck snakes have a plain yellow belly, sometimes with a few black dots down the midline. Adult length: 10 to 24 inches.

This snake lives in moist woodlands, usually staying hidden under logs, bark, or other objects. Ring-necked Snakes have been recorded throughout Michigan, but are generally rare and local. They are common on some of the larger islands in Lake Michigan.

These gentle little snakes are usually found in grassy places where their color makes them difficult to see. Smooth green snakes have been found throughout Michigan, but seem to have disappeared from much of the southern Lower Peninsula. Their insect diet may make them vulnerable to the effects of chemical pesticides.