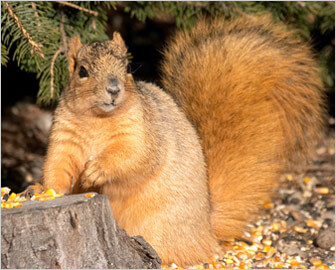 Interesting Facts on Squirrels and Their Behaviour:

Squirrels are one of the most successful mammals in adapting to human-altered environments. They are among the top predators for presenting problems to people.

Squirrels can find a ways to climb into attics or empty rooms. They love being protected from natural enemies such as hawks and cats and even snakes. And they enjoy the snug warmth, too. Squirrels can be pretty noisy in an attic and cause a great deal of damage chewing on wires, through roofs, and also leaving behind droppings and urine.

Tree squirrels are active during the day — unlike most other rodents such as mice, rats, raccoons and opossums. Being mammals, they like nice temperatures, so you find them during the summer time, during cool hours — early morning and late evening. In the winter time, they like afternoon sunshine to help keep them warm.

Tree squirrels run fast and jump long distances on tiny branches high up in trees. Ground squirrels dig long tunnels very fast. Many squirrels chatter and use their tails to communicate a complex language. All squirrels have very sharp teeth and flexible front paws — and are very smart about opening containers and solving other food-related challenges. Squirrels have sensitive hearing. Squirrels have big eyes that see very well — but they are on the sides of their heads, so they don’t see what’s at the tip of their nose. That’s one reason it can be dangerous to feed a squirrel — it can’t see your fingers and might accidentally bite you if you get too close.

Squirrels in Your House or Attic?:

B&B Wildlife Removal Services understands that squirrels are cute with their big eyes and bushy tails. We also understand that you don’t want them living in your home or attic. Squirrels will build nests in attics, chimneys, vents, roofs and walls. Squirrel nests tend to be large in relation to their body size and very messy, often extending several feet along a vent pipe or in an attic. Their large dry nests and electrical wire chewing make them a major fire hazard. We humanely trap the squirrels and relocate them to a safe place, then seal the entry points so they don’t get back in.

Squirrels are almost never found to be infected with the rabies virus. Squirrels also have not been known to cause rabies in humans within the United States. Bites from a squirrel are not considered a risk for rabies unless the animal was sick or behaving in an unusual manner, and rabies is widespread in the area.